The Courtroom is My Theater

The Courtroom Is My Theater: My Lifelong Representation of Famous Politicians, Industrialists, Entertainers, “Men of Honor,” and More 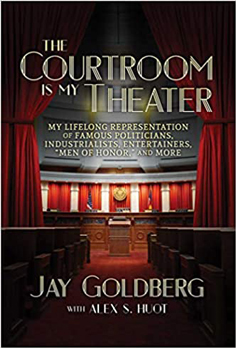 Jay Goldberg was appointed by Attorney General Robert F. Kennedy as acting U.S. Attorney for the Northwest District of Indiana. He served as Special Attorney and counselor to the U.S. Department of Justice and was legal assistant to James B. Donovan at the time of the transfer of convicted Russian Spy, Rudolph Abel, for American U-2 pilot Francis Gary Powers. Jay also served as an assistant District Attorney, New York County, and later began his own practice as a defense attorney.

In The Courtroom Is My Theater, Jay shows why he is one of the preeminent trial attorneys in America. He shares stories of his high-profile courtroom drama, as well as his adventures outside of the courtroom with some of the country’s most prominent politicians, businessmen, entertainers, and “men of honor,” including Donald Trump, Dr. Armand Hammer, Willie Nelson, Waylon Jennings, Mick Jagger, Mile Davis, Sean “Puffy” Combs, and Joseph Gambino.

“The Courtroom Is My Theater: My Lifelong Representation of Famous Politicians, Industrialists, Entertainers, ‘Men of Honor,’ and More” was published by Post Hill Press, distributed by Simon & Schuster. Alex S. Huot, listed as the author on the cover with Jay, was an assistant to Jay when the book was written. William served as a ghostwriter for Jay with Alex’s assistance.