Angel in the Rubble

Angel in the Rubble: The Miraculous Rescue of 9/11's Last Survivor 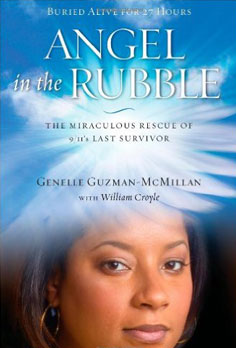 For twenty-seven hours, Genelle Guzman-McMillan remained below the surface of One World Trade Center in Lower Manhattan after airplanes struck the twin towers on 9/11. During this time, she couldn’t help but reflect on the life she’d lived and how she’d drifted from the faith she once knew.

One of Genelle’s most painful regrets was that she’d left her daughter behind in Trinidad while she pursued her dream of singing and dancing in America. As death now seemed certain, she feared where it would take her. And then she remembered, when she was a child in Trinidad, witnessing the miraculous recovery of her aunt. Maybe, just maybe, God had a miracle for Genelle as well.

Genelle prayed for hours, remembering each detail of her walk away from the faith she’d known as a child. She begged God to forgive her―accepting that she may soon die, but praying for the miracle of life and a chance to live that life with a new purpose and direction.

God answered her prayer by sending an angel to sustain her. Now living in the light, Genelle is making good on the promises she made in the dark while buried in the rubble.

“Angel in the Rubble: The Miraculous Rescue of 9/11’s Last Survivor” was published by Howard Books, a division of Simon & Schuster. It is also in audio form and was printed in Australia, Germany, and Brazil. In 2020, it was optioned to Lifetime for a television movie. More details on that to come in 2021.