Lessons from a School Shooting Survivor

Lessons from a School Shooting Survivor: How to Find the Good in Others and Live a Life of Love and Peace 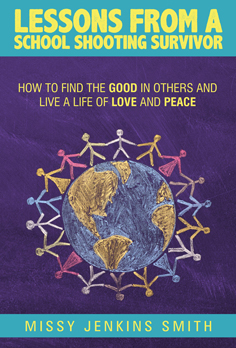 The beacon of hope that day for the city, the nation, and the world was Missy Jenkins Smith, who was paralyzed from the chest down. Missy immediately and courageously forgave the 14-year-old boy who shot her, making the conscious decision that his actions were not going to define who she would become. It is a hope that is shining brighter than ever today.

Missy has followed her 2009 award-winning book I Choose to be Happy: A School Shooting Survivor’s Triumph over Tragedy with this new book. Crafted for a middle school and high school audience, and with classroom activities at the end of each chapter, Lessons from a School Shooting Survivor features fresh stories about Missy's life since the shooting as they relate to the principles of listening, empathy, forgiveness, laughter, optimism, and kindness. In an attempt to reverse the incessant negativity that has blanketed our country the past several years, Missy encourages today's youth to create a narrative of their own lives and the lives they touch that is based on love and peace.

Missy has appeared on numerous television programs and in several publications, including Oprah, Good Morning America, Dateline, Montel, Ricki Lake, CNN Tonight, People, Glamour, and Ladies’ Home Journal. She serves today as an inspirational speaker. She is married with two children and lives on a farm in Murray, Kentucky.

“Lessons from a School Shooting Survivor: How to Find the Good in Others and Live a Life of Love and Peace” was published by West Park Publishing.